India is a country of Gods, Goddesses, and temples. There are 33 crores of Gods and Goddesses that are worshipped all over the country in different forms and in different temples that are located all over the country. Indian culture also teaches us to go to the temple regularly and worship the god over there. There are various big temples and trusts all over in India, which look after the temples in India. These temples include Sai baba temple, Shirdi, Somnath Mahadev temple, Nathdwara temple, and many more. Among these temples is the Vardharaja Perumal temple, Kanchipuram where lord Athi Varadar is religiously worshipped.

Vardharaja Perumal temple is a temple of Lord Vishnu and located in Kanchipuram, TamilNadu. It is one of the 108 temples of Lord Vishnu which were visited by the 12 learned Tamilian poet-saints. The temple along with the ekambareshwar temple and Kamakshi Amman temple is known as the aboard of trio or Mumurti Vassam. It is one of the most sacred places for the South Indian Vaishnavites. It is believed that Ramanujacharya one of the most important gurus and exponents of Vaishnavism, resided at this temple and made it his home. Let us know more in detail about this temple, the legend behind it, the history, architecture, and lot more.

The legend behind the temple

There are many legends behind this temple, one of which that is very famous is that One day Lord Brahma was performing a Yagya at this place and Goddess Saraswati was not there. Now without a wife, he cannot perform Yagya and so he married a local girl from the village, who then went on to become Goddess Gayathri. Goddess Saraswati got very angry and took the form of fast-flowing river Ved Vati and decided to wash out the Yagya. But, Lord Vishnu who is believed to be the creator of the world according to Hindu mythology appeared over there and laid down on the ground and stopped the flow of the river. He then helped in sorting out the differences between Lord Brahma and Goddess Saraswati and helped them reunite and stayed back as a deity over there. The name of the temple was given from the name of a tree. Athi meaning fig tree. As per another legend, Lord Indra was cursed by Goddess Saraswati to become an elephant and roam the earth. Due to the absence of the king of Gods, there was chaos in heaven and then Lord Vishnu with his divine powers appeared in the form of mountain Hastagiri Attagiri and relieved Lord Indra of his curse. As per the third legend, the disciples of Gautam rishi were offering water at the temple when a lizard fell into it. When Gautam rishi came to know about this he got enraged and cursed them to turn into lizards. They stayed there as lizards and witnessed Indra getting turned into an elephant by the curse of Goddess Saraswati. But, soon Lord Vishnu freed Lord Indra of his curse and in turn, Lord Indra freed both the Lizards from their curse.

It is also believed that Lord Vardharaja also conversed with his ardent devotee Nambigal at this temple and that Nambi also composed Rajaashtakam, an 8 verse poem on Lord Vishnu and that Ramanujacharya got answers to many of his questions through Guru Nambigal from Lord Vardharaja.

The temple has a rich and vivid history that is spread beyond centuries. There are inscriptions in the temple stating donations by various ancient dynasties like the Cholas, Pandyas, Cheras, the Vijayanagara dynasty, and many more. The Perumal temple was renovated by the Chola Kings in 1053 AD. Robert Clive had visited the Garuda Seva festival and had presented a very precious necklace which is used for the deity on special occasions. During the Mughal invasion in 1688 headed by Aurangzeb, the idols of the deities were sent to Udayarpalayam in Trichurapally district. The situation was not ideal to bring back the idols till 1710, but, the chieftain of Udayarpalayam was not happy with the move. So, the idols were brought back only around 1728. Hence a festival is celebrated to commemorate the bringing of idols at an interval of every 40 years. Hence, Atthi Varadhar festival is celebrated every 40 years, by bringing the idols out of water.

The architecture of Vardharaja Perumal temple

The temple covers 23 acres of land and is famous for its holiness and ancient history. The temple architecture consists of three outer precincts namely Azhwar Prakaram, Madai Palli Prakaram, and Thiru Malai Prakaram, and has 32 shrines, 19 vimanams, and 389 pillared halls. There are many sacred tanks in the temple. The main sacred tank is known as the Anantha Theertham. The main temple faces the west direction and is built in such a way that on the 15th day of Chaitra Purnima the rays of the sun fall on the idol of the presiding deity. The better half of Varadraj Swami is known as Perun Devi Thaiyyar. The Vimana on the Varadraj Swami is known as Punya Koti, and that on Perun Devi Thaiyyar shrine is known as Kalyan Koti. There is a hall with 100 pillars which has paintings from Ramayan and Mahabharat era on its ceiling. It also has murals of the Vijaynagar Empire and has carvings of golden lizards on its ceiling. The temple is considered to be a masterpiece of the Vijaynagar architectural style. There is also a temple of Chakradeshwar on the eastern side of the main temple, where the idol of Chakradeshwar has six hands.

There is a huge festival hosted in the premises of this temple every 40 years in order to pay respect to the Lord Athi Vardar in memory of the day when an idol was brought back to the temple after the attack by the Mughals.  The reason the festival is celebrated every 40 years is that, in order to protect the idol, it was sent to a safe place for 40 consecutive years.

Every 40 years, the festival is celebrated at Varadraj Perumal temple in Kancheepuram. The festival lasts for 48 days. Devotees are allowed for darshan for 48 days. The lord is kept in sleeping position for 38 days and in standing position for another 10 days. During these days the state government provides several platoons of Tamil Nadu Police department for the security of the people and also provides several hundred transport buses.

People wait for the 40 years to end and when they can have their deities darshan. Since there is a lot of rush for the tickets for this darshan, people have to buy the tickets a lot of time in advance. Here due to heavy rush for ticketing sometimes online ticketing option is not available. In such a case, you can visit the temple and get physical tickets. Otherwise, you can get tickets from various online platforms.

Why the Athi Varadar idol is kept immersed in water? 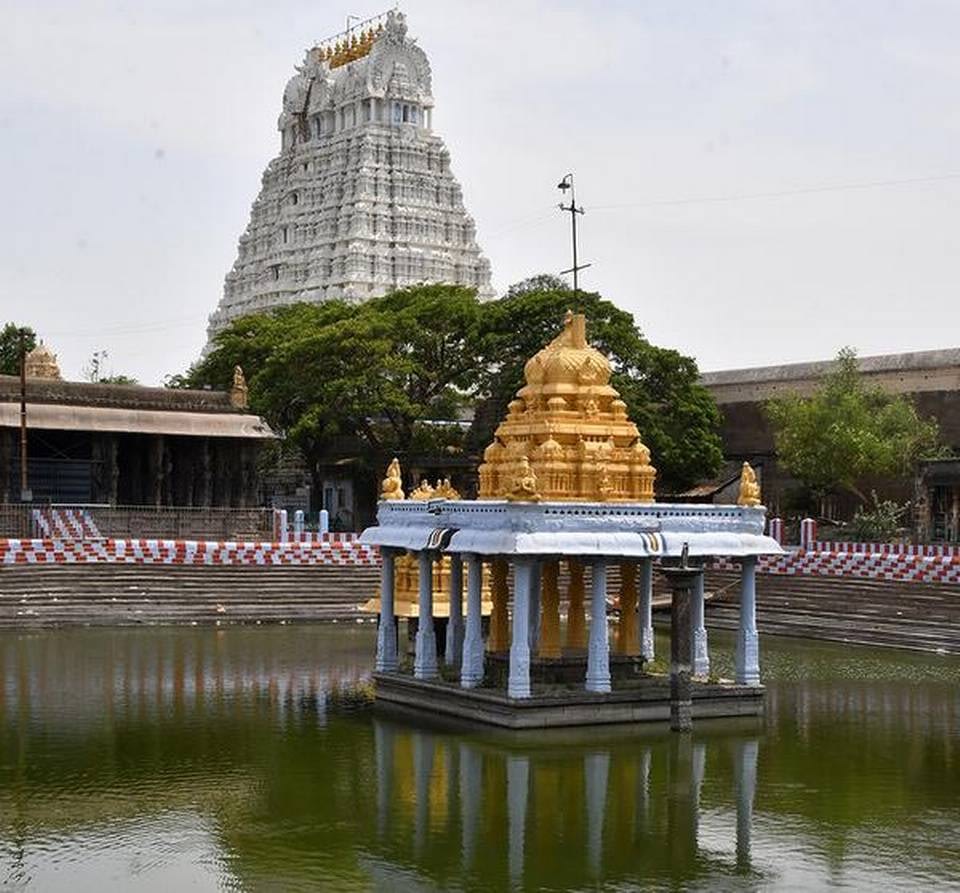 You might be wondering why the Athi Vardar idol is kept immersed in water. Well, let us have a look at it. The reason is that the statue is made from the roots of the fig tree. The statue is vulnerable to splitting as it dries out in the outer climate. Hence, the statue is kept immersed underwater.
This is the information we wanted to share with you about the Athi Varadhar temple darshan. If you know of something else, then please do let us know in the comments section.

This site uses Akismet to reduce spam. Learn how your comment data is processed.